2013 has been a great year for LessFilms. Our projects took us around the country and we even had our first international trip to Paris, France! Besides making great videos and telling stories, our favorite thing to do is EAT. Here's a list of our favorite restaurants of 2013.

Eric says, "Great pub! You could have punched me in the face and I would have been ok with it." Danny says, "They serve you peanuts by filling a bomb and sending it crashing to your table. Enough said."

English style food with a great selection of drinks. They play Churchill speeches in the bathrooms. Hill Country Chicken - You don't expect food like this in the big city.

Danny says, "Fried chicken, mac-n-cheese, and country music. It's like I've died and gone to heaven." 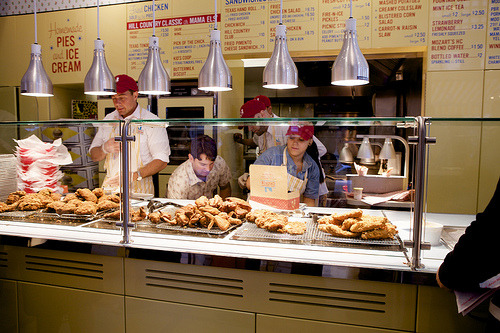 Eric says, "Everything in Vegas is fake but this burger is fo real."

Eric says, "This bacon is the answer to most of life's mysteries."

I wrote the article you're reading... Allan is the cofounder of LessFilms, loves his family more than breathing and creates adventures.

We'll help you reach your goal, with video.